Natural gas as a transport fuel is not a new story. With over 14.8 million natural gas vehicles (NGVs) on the roads worldwide, the industry is well-established, challenging perceptions about how all forms of transport are powered. In addition to increased supplies – thanks to the US shale revolution – the change towards gas has been further incentivised by regulatory, economic and environmental imperatives.

Road transport alone is currently responsible for 20 percent of CO2 emitted by the European Union; replacing petrol and diesel with natural gas is widely agreed to be the most effective route to both lowering fuel costs and improving emissions performance. And the success of NGVs on the road has blazed the trail for rail and marine – we explore the future of a cleaner, more efficient means of powering our transportation globally. 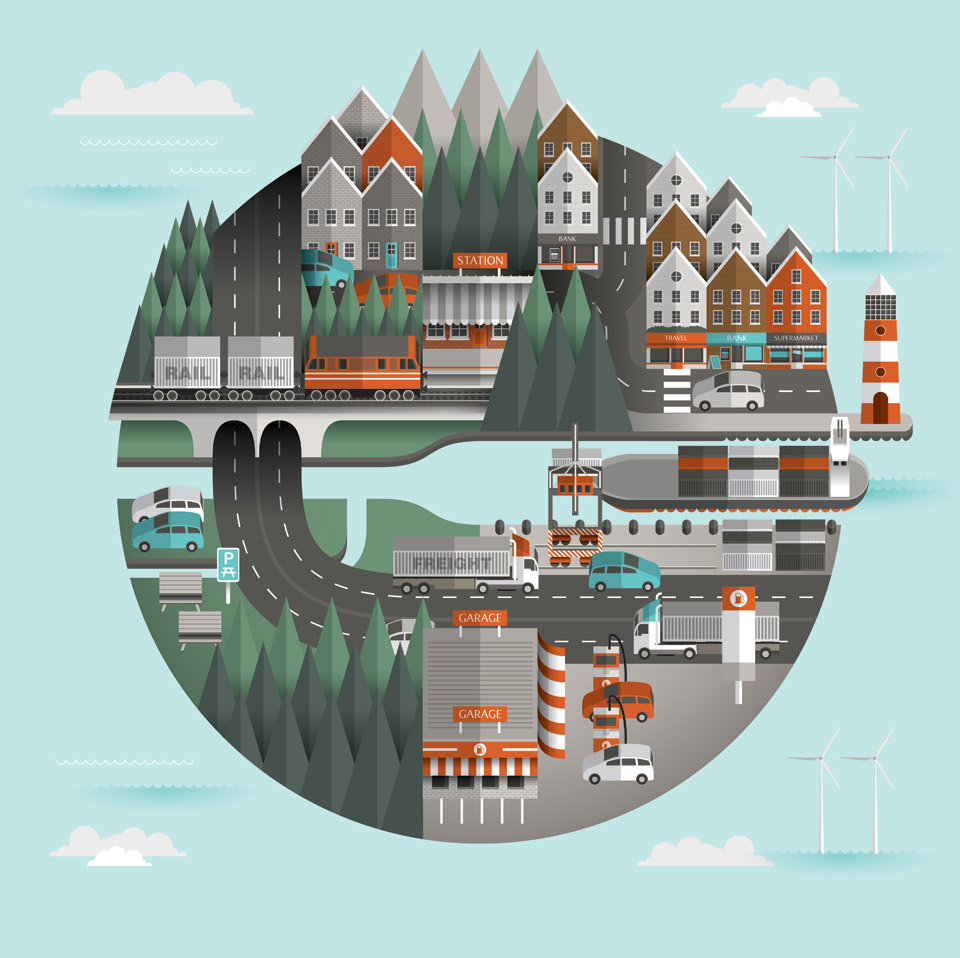 There are over 14.8 million natural gas vehicles (NGVs) on the roads worldwide, and thanks to the environmental and cost saving benefits that number is set to rise rapidly – to as much as 25 million by 2019.

The increasing number of cars on the road, combined with extensive innovations in NGV engines, means natural gas is a highly competitive industry. China is leading the way with 1.6 million NGVs currently, but the US is fast catching up thanks to growing investor confidence and cheap gas reserves.

Although adoption of NGVs is slower in Europe, Italy is leading the way with almost a million NGVs on the road, and other markets such as Italy and Germany are introducing tax incentives and regulations to encourage their growth.

The economic and environmental advantages of natural gas are particularly acute for Heavy Goods Vehicles. As a result there is a significant global truck market opportunity where the adoption rate in the leading markets of China, India and Europe is moving faster than the gasoline to diesel.

A truck travelling on natural gas can travel on £0.39 per mile, which is a saving of 37% on diesel. By switching to natural gas each truck could save over £16,000 per year on fuel.

Taking diesel powered trucks off the roads has the dual-advantage of reducing NOx and other harmful particulates being emitted into the atmosphere.

With car ownership and road freight set to rise, combined with extensive innovations in NGV engines, natural gas as a road transport fuel is becoming highly competitive. The economic and environmental advantages are particularly acute for Heavy Goods Vehicles (HGVs), making them attractive to both individual operators and fleet businesses alike.

China is leading the way with 1.6 million NGVs currently on the roads, predicted to rise to 5 million by 2020, but thanks to growing investor confidence and cheap gas reserves, the US is fast catching up. The International Energy Agency (IEA) predicts that together these two giants will account for the majority of gas consumption in transport by 2035.

By comparison the European market is slower to adapt, with only 10 percent of global NGVs. Yet here too change is taking place; Italy appears an early front runner, with Germany ambitious to catch-up. Several other European nations have also announced the introduction of tax incentives and regulations to encourage the growth of NGVs.

The railway system is one of the most fuel consuming forms of transport; in 2012 alone the seven major US freight railroads collectively consumed more than 3.6 billion gallons of diesel, accounting for 7% of US consumption for the fuel that year.

So the benefits to be gained for converting to gas are huge. Liquefied Natural Gas (LNG) boasts cost savings of between 40% and 60% for rail, and although the start-up capital is high, overall cost saving is expected to be $200,000 each year across the typical 30 year lifespan of a train.

Due to the potential savings and environmental benefits that come with using LNG it is thought that in the US alone 35% of freight rail energy consumption will be powered by LNG by 2040.

American company Class 1 railroads spent a staggering $9 billion on diesel fuel in 2012, so the appeal of cheaper, cleaner natural gas is clear. The preferred rail solution is fast becoming Liquefied Natural Gas (LNG), which boasts cost savings of between 40 percent and 60 percent.

Although high capital investment costs are required to retrofit an LNG engine to a train, the overall cost saving is expected to be $200,000 each year across the typical 30 year lifespan of a locomotive. An added benefit is the need to refuel less frequently – an LNG powered train can run between Los Angeles and Chicago without stopping to refuel.

Many predict that gas powered ships could achieve the greatest market penetration of all natural gas vehicles (NGVs), particularly in light of regulations limiting emissions from shipping.

Whilst costs vary, the cost of Liquefied Natural Gas (LNG) is often less than half that of Heavy Fuel Oil which is currently used in most ships, and forecast to drop in the future, making it even cheaper for marine vehicles. When compared to oil LNG is far better for the environment, with 25% less CO2, 90% less NOX, 100% less SO2 and 100% less soot and other harmful particles.

LNG also has significant safety benefits over oil; it is much less flammable, and in over 40 years there has never been a notable safety concern or issue.

Although the number of gas powered ships is much lower in comparison to road vehicles; this is not to say gas does not have a significant role to play. Marine vessels have much lower turnover and both the economic and environmental factors mean many predict that gas powered ships could achieve the greatest market penetration. This is particularly true in light of International Maritime Organisation regulations that ensure that both industry and governments limit the amount of emissions from shipping over the next decade.

In Europe natural gas fuelled ships are already being built and operated in national waters (mainly for transport and commercial use). Norway has long been a front runner, and Statoil uses gas powered boats to transport goods and equipment to offshore installations where the gas originally is first extracted from the ocean floor.

Gas is also being used to power longer ocean voyages: LNG is unsurprisingly used to power LNG tankers and now shipping owners are exploring the possibility of using gas to power huge container ships around the globe.

The step-change from diesel to gas does not require a huge engineering leap as there is a healthy market of marine vessels being retrofitted with gas powered engines. Retro-fitting or building new gas powered marine vessels can also help to stimulate the global ship manufacturing industry.

Christopher Le Fevre, of the Oxford Energy Institute, agrees that the opportunity for LNG fuelled ships in the marine sector is particularly significant, as it will form the base for the next wave of developments in the use of natural gas as a transportation fuel. “The combination of regulatory and economic drivers could kick start the build-up of a marine fuelling network that could then extend to land based applications in HGVs and rail.”

In summary, natural gas as an alternative transport fuel works and is here to stay. The environmental and economic benefits, combined with market forces, are creating a new chapter in manufacturing and transport.