New research has emerged in the field of Absorbed Natural Gas (ANG). ANG is an alternative to Compressed or Liquified Natural Gas (CNG and LNG), which may include a process that is both more financially feasible and safer to handle than the two current options.
August 12, 2019

This year we've seen continued growth in the Liquefied Natural Gas (LNG) distribution out of the US. Currently there is approximately 7% of the total US dry gas production being shipped by way of transport tanker to Europe and Asian markets. New research has created a really interesting technology that may change the way natural gas is stored and shipped. 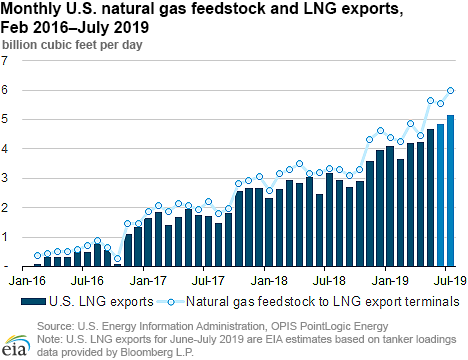 New research has emerged in the field of Absorbed Natural Gas (ANG). ANG is an alternative to Compressed or Liquified Natural Gas (CNG and LNG), which may include a process that is both more financially feasible and safer to handle than the two current options.

Currently, natural gas requires either a very high pressure (CNG) or a very low temperature (LNG) to convert it into a format for easy storage or transportation at sizable volumes of the commodity. Two researchers from Texas A&M University have created a polymer, plastic-based material that can absorb natural gas at relatively low pressures, and unload once pressure is released, to release the natural gas later on, much like a sponge.

While the field of ANG is not a brand new one, it has been plagued with issues like materials heating up upon absorption, as well as adsorbent capacity, which was dramatically increased “well above the target for materials in order to considered [commercially] feasible, which is determined by U.S. Department of Energy”. Adding to this the fact that it apparently has a very cheap production cost, relative to current options, makes it an even more attractive format to store natural gas.

The new ANG solution has been tested not only in a controlled, lab environment, but also in more realistic application scenarios. In a real-world test where pressurized gas was transferred to a cylinder full of the absorbent, the material topped current records by over 20%.

This research is exceptional, not only for storage solutions but also for transportation. While natural gas burns approximately 30% cleaner than oil and over 40% cleaner than coal, methane released by gas leaks in transport may offset much of the benefit to the climate. Incorporating a solid-state absorption method may help create a much more stable medium for transportation and storage than what is currently being used. If this method is also more economically feasible, then we should be expecting to see this technology being rapidly and widely adopted over the next decade.