The Ontario Ministry of Energy released the 2017 Long-Term Energy Plan (LTEP), titled Delivering Fariness and Choice, on October 26th. The 2017 has a strong focus on providing Ontarians the choice on how they use electricity, promoting conservation first, and a continued push towards renewable and non-GHG emitting sources of generation.
October 30, 2017

The Ontario Ministry of Energy released the 2017 Long-Term Energy Plan (LTEP), titled Delivering Fariness and Choice, on October 26th.  The 2017 LTEP has a strong focus on providing Ontarians the choice on how they use electricity, promoting conservation first, and a continued push towards renewable and non-GHG emitting sources of generation.

For Industrial customers, there is not a whole lot in the LTEP that will impact them.  The largest and most substantial potential change is how Class B customers will be charged Global Adjustment (GA).  Currently GA is charged to these consumers as a flat rate $/kWh.  The government is looking into potentially charging GA on a Time-of-Use basis, which they state will save some companies money and promote conservation.  This shift would essentially put Class B industrial users in the same boat as residential consumers, meaning that using electricity mid-day will cost more than off-peak hours.  Although the program makes sense, since electricity is cheaper in off-peak hours the associated GA should reflect that as well, it does mean that many Class B consumers will be charged more if they typically consume energy on-peak.

Other notable changes for industrial users include a renewed commitment to energy conservation.  This statement is a welcome fact for customers who are putting money and resources into energy efficiency and conservation programs.  The statement included a continuation of the Industrial Conservation Initiative, with no news on whether the 500kW minimum will change, increased exploration into ways to provide assistance to mid-sized industry, and increased program offerings through the Green Ontario Fund.

Another change, one that is less welcome, is the statement that starting July 1st, 2018, CHP systems that use fossil fuels will no longer be eligible for incentives. CHP systems were gaining recognition as a way to ensure electricity reliability by generating electricity on-site.  In particular, critical facilities, such as hospitals, were just starting to adopt CHP systems.  Although the government is scrapping funding for CHP systems, the LTEP is looking at renewables and battery storage as options, and funding for those projects may be available.

Lastly, we will look at the electricity price outlook for large industrial consumers.  The chart below can be found in the 2017 LTEP. 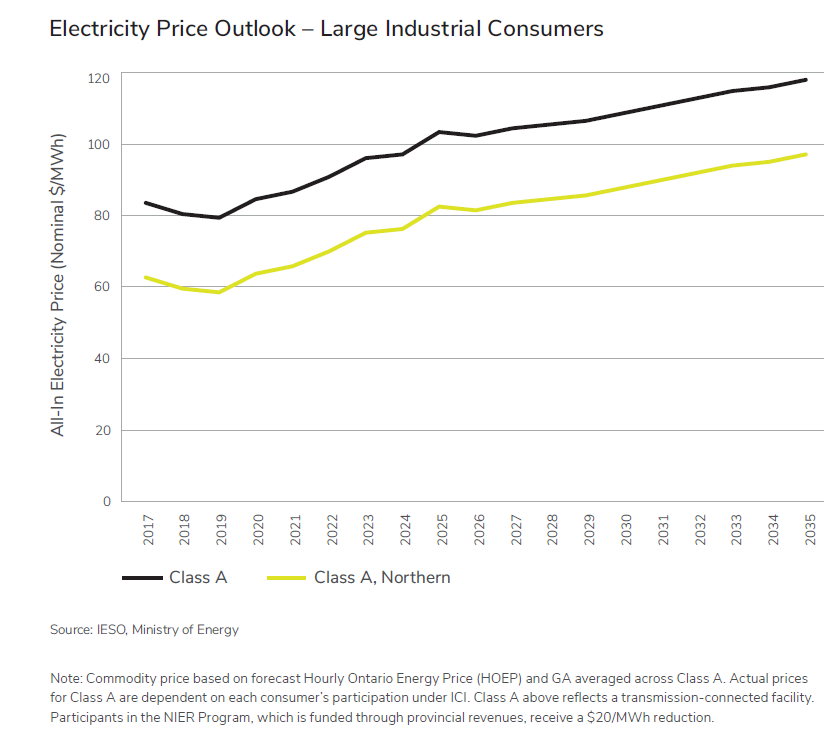 The two important things to note are that electricity prices are going to increase, and that the fine print of this chart means that it does not reflect most industrial users’ electricity pricing. This chart was created using a transmission-connected facility who is a part of the Industrial Conservation Initiative.  Transmission-connected companies total 59 in Ontario.  While these companies are large users of electricity, they do not represent the majority of industrial users in Ontario.  Many of these large users have the means to have a dedicated in-house energy management team.  This allows them to most effectively take advantage of government programs, such as the ICI and the Demand Response Auction, secure funding for projects, and identify energy reduction opportunities.

However, the average industrial user does not have a dedicated energy manager, they may not meet the threshold for ICI or the Demand Response Auction, and may not have the capital required for efficiency upgrades.  These consumers are the ones most impacted by changes in electricity rates, however the LTEP does not outline what their current or forecast costs are.  For the average industrial consumer an external energy management team such as the one at Canadian Energy Strategies, provides the most cost-effective means to understand their usage and achieve savings.